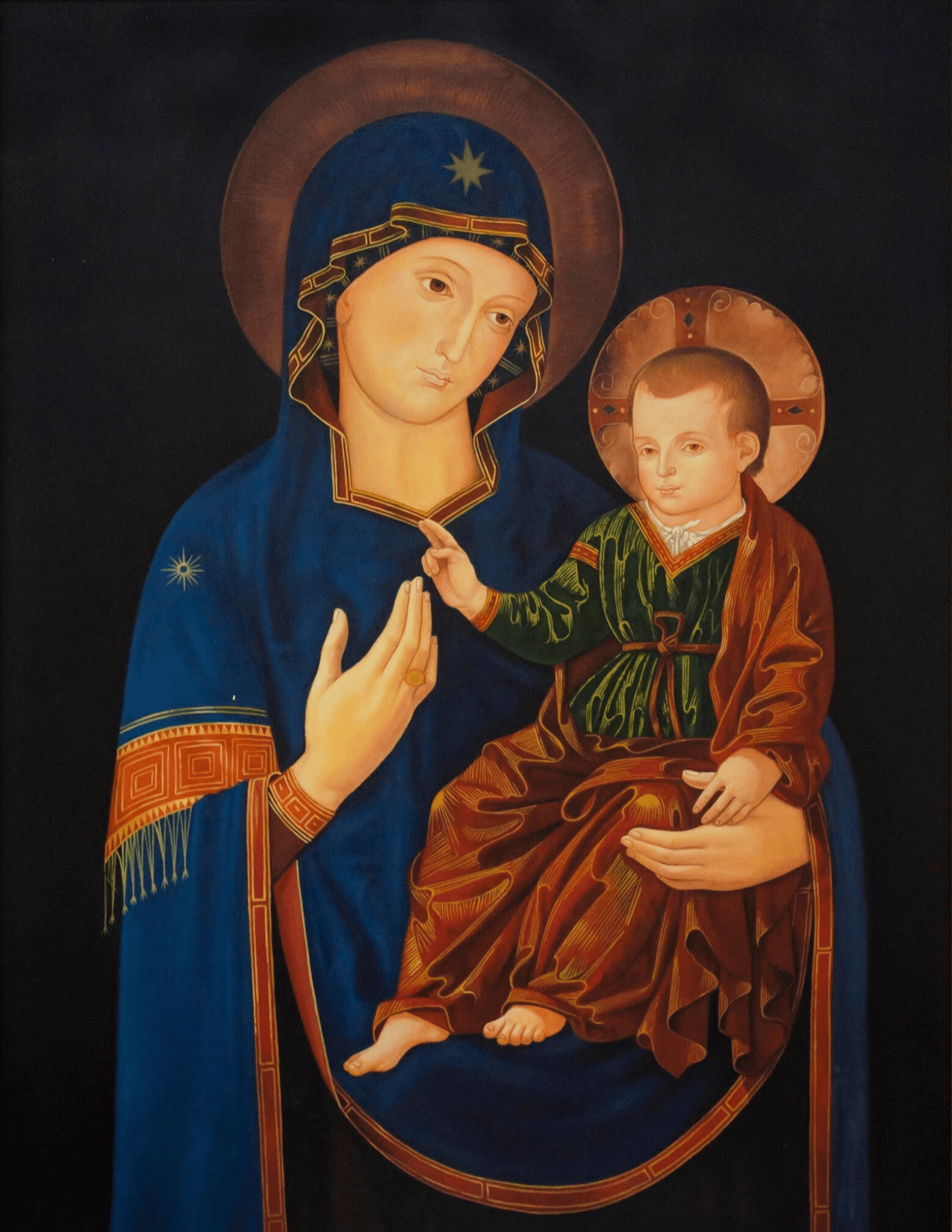 Our Lady of Consolation

The icon of Our Lady of Consolation is said to be painted by Saint Luke the Evangelist. It was eventually given to Saint Maxmius, the first Bishop of Turin, Italy by Saint Eusebius in the fifth century, who had brought the icon from Palestine. The icon was placed in a small oratory and pilgrims from all over Europe came, seeking the consolation of Mary.

Around the year 820 when the iconoclasm began, sacred images were destroyed throughout the Byzantine empire. At the time the oratory of Our Lady of Consolation was under the care of a community of monks. To save the icon from destruction, they hid it under the oratory. The iconoclasm wreaked havoc in Turin and eventually the oratory itself fell into complete ruin. The icon was lost and as time passed, its memory was forgotten.

In the year 1014, the Marquis of Ivrea fell ill. On the brink of death he turned to Mary, asking her to be healed. Mary appeared to him accompanied by Saint Benedict & Saint Mary Magdalene. She promised the Marquis would be completely healed if he did as she commanded: he was to build three chapels in her honor. The Marquis did as Mary asked and upon digging the foundation for the new chapel, the workmen uncovered the icon, miraculously untouched by dirt or time! The chapel was built and the icon of Our Lady of Consolation was given the place of honor  over the main altar. The chapel was eventually called the Church of Saint Andrew and became a place of pilgrimage, with many healings attributed to the intercession of Mary.

Over the next seventy years and through wars, riots, and plagues, the Church of Saint Andrew again fell into ruin and the icon disappeared. In 1104, a blind man named Jean Revais who lived in Briancon, France, saw Mary in a dream. She revealed the location of the icon beneath the bell tower of a ruined church. There, Mary told Jean that his eyesight would be restored when he uncovered the icon.

Jean made the difficult journey from France to Italy accompanied by a guide. As he reached the vicinity of Turin on June 20, 1104, his eyesight was briefly restored: he saw a bright light shining over the tower from his dream. People began to notice Jean and the bells of the churches rang, calling the people of Turin to the site. The people began to dig and soon discovered the icon of Our Lady of Consolation, again miraculously untouched by dirt or time! At that moment, Jean regained his eyesight to the astonishment of the crowd.

The icon was given a place of honor over the main altar where it remains to this day. During the siege of 1706, the French and Spanish forces marched on Turin, closing  in near the Shrine. The leaders of Turin turned to Our Lady of Consolation, asking her to spare them. Mary listened to their pleas and the city of Turin was spared. Because of this, Our Lady of Consolation was proclaimed the patroness of Turin in 1714.

Our Lady of Consolation was crowned by Papal authority in 1829. Her feast is celebrated each year on June 20, the day Jean regained his sight. Many Saints and other holy people have made pilgrimage to the Shrine of Our Lady of Consolation, including Saint Francis de Sales, Saint Joseph Cafasso, Saint John Bosco, Blessed Joseph Allamano (founder of the Consolata Missionary Sisters), Blessed Pier Giorgio Frassatti, and more recently, Blessed Chiara Badano.

symbolizing her royalty and heavenly Queenship.